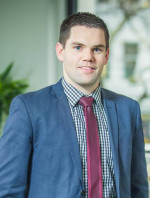 During his time at Be Collective, Dan was in charge of managing the roll out of Be Collective in New Zealand, working with a range of stakeholders to assist them to adopt and implement social infrastructure within their businessess to manage and record their social contribution they have in their respective communities. This role included a strong local government focus, and has seen Dan remain very much connected to a sector that he remains so passionate about.

Prior to Be Collective, Dan spent his previous 4.5 years working at Local Government New Zealand in several roles, with the last role working as a Consultant with EquiP. Prior to this role, Dan was the Executive Coordinator for the Mayor’s Taskforce for Jobs (MTFJ), where he played a vital part in restructuring the MTFJ to sit within LGNZ.

Based on his previous tenure at LGNZ, Dan has a passion for local government meeting the needs of the communities that they represent, and sees the CouncilMARK programme as a great vehicle to ensure local government continues to deliver high quality and transparent services to community.

A keen sportsman and a devout family man, Dan spends his free time with his young family, and (trying to) play golf and cricket.